The series depicts the lives of a fictional monarchy in modern times where power is everything, limits do not exist, and trust is a luxury this family can’t afford.

E01: Stand And Unfold Yourself

After the sudden death of their older brother and heir to the throne, Prince Liam and Princess Eleanor have a hard time with their new roles; Queen Helena tries to maintain the family's image; King Simon questions the monarchy's future.

E02: Infants Of The Spring

Prince Liam is reunited with his ex, Gemma, at the annual garden party; the Queen and Cyrus work against King Simon.

E03: We Are Pictures, Or Mere Beasts

Prince Liam does his first PR tour as heir to the throne; Queen Helena forces Princess Eleanor to do a PR tour of London.

E05: Unmask Her Beauty To The Moon

E06: The Slings And Arrows Of Outrageous Fortune

A trip to Monaco helps Prince Liam and Ophelia's relationship blossom but a different side of Princess Eleanor is revealed.

E07: Your Sovereignty Of Reason

The king makes a decision that affects the family; Ophelia must deal with the fallout from the PR tour in Monaco.

The Royal Family is put on lockdown in a safe room at the palace after an assassination attempt.

E09: In My Heart There Was A Kind Of Fighting

Prince Robert receives a visit from someone from his past; Prince Liam and Princess Eleanor must deal with their own demons.

E10: Our Wills And Fates Do So Contrary Run

Not knowing that Cyrus manipulated the paternity announcement, Liam asks Ophelia to run away with him. Eleanor drops the charges against Jasper and enlists his aid in meeting Robert's killer. Helena does a television interview. Cyrus finally gets his wish.

E02: Welcome Is Fashion and Ceremony

In Prince Liam's quest for vengeance, a secret is revealed that affects the monarchy's future while Princess Eleanor rekindles an old flame.

E03: Is Not This Something More Than Fantasy?

Prince Liam and Princess Eleanor both go on trips that don't end as they expected; Queen Helena meets a new rival; King Cyrus gets some bad news.

E04: What, Has This Thing Appear'd Again Tonight?

E05: The Spirit That I Have Seen

Princess Eleanor’s new relationship makes waves in and outside of the palace as King Cyrus uses a public ceremony to solidify his image and Queen Helena learns of betrayal.

The twins have a birthday party in the palace and things get out of hand. Meanwhile, Queen Helena and Prince Liam look to the past for answers about the future.

E07: Taint Not Thy Mind, nor Let Thy Soul Contrive Against Thy Mother

E08: Be All My Sins Remembered

Relationships are changed forever when The Royals' family history is called into question.

E09: And Then It Started Like a Guilty Thing

Questions of the King's killer come to the forefront and the monarchy's structure is challenged.

E10: The Serpent That Did Sting Thy Father's Life

The royal family faces the possibility of the abolition of the monarchy.

E01: Together with Remembrance of Ourselves

In the wake of the death of King Simon's murderer, the royal family returns with a fresh perspective. Liam seeks solace in disreputable places, while Prince Robert is revealed to be alive, but is he well?

E02: Passing Through Nature to Eternity

Queen Helena, along with her new Lord Chamberlain, devises a plan to secure proof of Prince Liam and Princess Eleanor's paternity. Liam begins a new but complicated relationship, while Jasper and Eleanor look to the past to inspire their future together.

While under the weather, Helena gets hooked on a reality television program. The true paternity of Liam and Eleanor is revealed at a time when the prince and princess are each focusing on passionate relationships.

Jasper and Eleanor immerse themselves in their relationship while Liam is forced to reappraise his latest tryst. Enduring his cancer, King Cyrus is visited by his past, while the palace arranges a press conference to announce earth shattering news.

On the eve of a very public appearance, the family’s private turmoil threatens to go public; Beck returns to the palace with his sights set on Eleanor, and a confrontation with Jasper ensues.

E06: More Than Kin, and Less Than Kind

Christmas comes to the palace; Liam impulsively releases the staff, forcing the family to fend for themselves; a sexual dalliance for Helena has unexpected consequences.

The royals prepare for the People's Gala; each member of the family is auctioned off for charity; Cyrus initiates a plan to retain his crown; Liam and Robert square off in a charity boxing match.

E08: In The Same Figure, Like The King That's Dead

Jasper tries to strike a bargain to protect his past and secure his future; Helena slips away for a romantic trip to Paris; Eleanor participates in a nearly naked tiger run; Liam and Willow try to navigate emotional waters.

Eleanor and Queen Helena consider romantic invitations; a Privy Council meets to determine who will reign as the one true King of England; Jasper reveals to Liam information that presents a new mystery for the monarchy.

E10: To Show My Duty in Your Coronation

Liam finds himself in unexpected places; Helena's heart breaks over a recent loss; Jasper makes a final play for Eleanor's heart; historic changes assure that nothing will ever be the same.

E01: How Prodigal The Soul

Robert gains popularity on his coronation tour, while Jasper and Liam have information that could end his reign; Eleanor must choose between returning to Jasper or working abroad with Sebastian.

E02: Confess Yourself To Heaven

E03: Seek For Thy Noble Father In The Dust

Liam makes a big move with the evidence he has on Robert while Eleanor uses her status to help others and Helena finds herself at the center of a new scandal.

E04: Black As His Purpose Did The Night Resemble

A total blackout in London sparks chaos. Willow’s feelings for Robert grow stronger. Eleanor opens the palace to the public and Jasper finds himself in the middle of a riot.

Robert extends his power further than ever before and exiles a disloyal Cyrus. Eleanor undertakes a covert mission and Helena explores her romantic options.

E06: My News Shall Be The Fruit To That Great Feast

Tensions rise at a family dinner celebrating the Queen’s birthday, as Liam brings a surprising guest and Jasper finds out the identity of the man who shot him.

E07: Forgive Me This My Virtue

Eleanor enlists Jasper’s help for one of her covert missions. Helena begins a new chapter at a royal event where the press attacks Willow. Cyrus meets an unlikely ally.

E08: In The Dead Vast And Middle Of The Night

Eleanor throws Willow a party that spirals out of control, while Robert forms a sinister alliance. Liam proves his loyalty to his brother, but at what cost?

Liam’s true intentions are revealed and the family come together to try and navigate the hard path that has been set for them. Jasper helps Liam with a plan and Willow and Robert hit a rough patch.

E10: With Mirth In Funeral And With Dirge In Marriage

The finale culminates in a day that will change the family and the nation forever. A burgeoning uprising has Robert suspicious of everyone, as the rest of the family unites to combat a formidable foe. 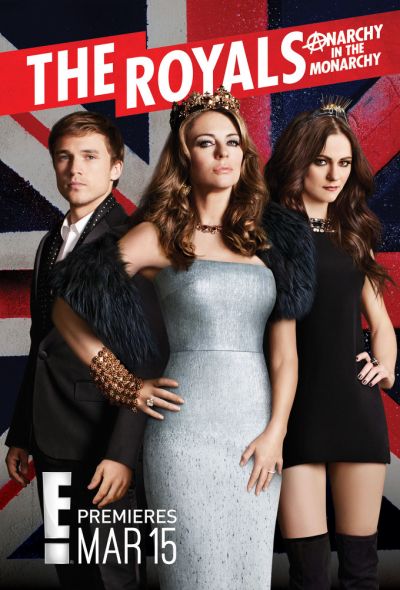