Eleanor Shellstrop is an ordinary woman who, through an extraordinary string of events, enters the afterlife where she comes to realize that she hasn't been a very good person. With the help of her wise afterlife mentor, she's determined to shed her old way of living and discover the awesome (or at least the pretty good) person within.

E01: Everything is Fine

When Eleanor dies and winds up in an afterlife paradise reserved for only the most ethical people, she realizes she's been mistaken for somebody else.

Eleanor wants Chidi to teach her to be a good person, so he insists that she participate in a neighborhood cleanup instead of learning to fly.

Eleanor thinks Tahani knows her secret. Michael tries to get Chidi interested in a new hobby. Janet goes through some strange personality changes.

Eleanor becomes friends with another neighborhood resident who's hiding something. Tahani plans a gala for the opening of a new restaurant.

Chidi tires of spending so much time teaching Eleanor. Tahani snoops and doesn't like what she finds. Michael quarantines the neighborhood.

E06: What We Owe to Each Other

Eleanor distracts Michael from his search for the design flaw that's disrupting the neighborhood. Chidi horns in on Tahani and Jianyu's spa date.

After learning Michael's retirement will be an eternity of torture, Eleanor decides to deactivate Janet, the only one able to send Michael away.

Trying to uncover the truth, Michael interrogates Eleanor about her life, and also interviews Chidi, Tahani and Jianyu. Chidi faces a moral dilemma.

Michael has difficulty negotiating for Eleanor's fate. The Bad Place demons misbehave at Tahani's house. Chidi bonds with the other Eleanor.

Michael is frustrated by Chidi's indecisiveness. Eleanor discovers feelings she didn't realize she had. Jianyu makes a surprising announcement.

Eleanor tries to improve her score before the judge arrives. Michael makes a surprising discovery. Chidi asks Eleanor for advice about love.

Eleanor flees to the Medium Place with Jason and Janet, where they meet a former lawyer who lives there alone. Meanwhile, Eleanor's trial proceeds.

Eleanor, Jason, Chidi and Tahani argue about which two of them should go to the Bad Place. Eleanor has a shocking realization about the Good Place.

E01: Everything Is Great!

With their memories erased, Eleanor, Chidi, Tahani and Jason start their Good Place experience all over again. Eleanor tries to understand her clue.

As issues continue to arise, Michael keeps trying to make his elaborate plan for the Good Place work. Eleanor makes a surprising discovery.

As Michael tries to put a new plan in place, Eleanor and the gang must make an important decision. Tahani learns a shocking truth about herself.

Eleanor tries to help Michael through a crisis. Tahani is determined to throw her most impressive dinner party yet, but things go awry.

Chidi is frustrated by Michael's inability to understand the principles of human ethics. Tahani confides in Janet.

Michael works with Janet to try to get to the bottom of her recent glitches -- which could cause the entire neighborhood to collapse.

Michael turns to Eleanor and Chidi for help with solving a tricky problem created by Janet. Jason surprises Tahani with an unexpected idea.

When Michael's boss arrives and makes an announcement, loyalties may be shifting. Eleanor, Chidi, Tahani and Jason must decide on their next move.

Michael experiences some unexpected emotions. After a disappointing setback, Eleanor, Chidi, Tahani and Jason open up to each other.

In an effort to save themselves, the gang goes on an adventure to a new realm in disguise -- but things don't go as planned.

Eleanor, Chidi, Tahani and Jason try to prove they've become better people. Michael must face the consequences of his actions.

Janet and Chidi reveal some unexpressed emotions. Michael pushes for a new kind of experiment.

E01: Everything Is Bonzer!

In the season premiere, Michael returns to Earth to give Eleanor, Chidi, Tahani and Jason a little nudge in the right direction when their initial attempts to become better people falter.

Intent on wrecking Michael's plans, Trevor shows up on Earth to join Chidi's study and annoy the gang into breaking up.

Sequestered on Earth, Michael and Janet meddle in Eleanor, Chidi, Tahani and Jason's lives to remove any obstacles that might derail the gang's efforts to become better people.

The group explores the three main branches of ethical thought.

E05: The Ballad Of Donkey Doug

Jason visits with some people from his past while Chidi gets help in resolving a problem.

Eleanor makes a startling discovery that tests her resolve, Tahani looks to make amends and Janet does some bonding.

E07: The Worst Possible Use Of Free Will

Eleanor looks back on some forgotten moments from her past.

E08: Don’t Let The Good Life Pass You By

Michael and Janet visit the person they believe to be the blueprint for how to live a good life on Earth, and Eleanor turns to Tahani for advice.

Michael's resolve is put to the test. Meanwhile, Jason wrestles with his feelings and Chidi surprises Eleanor.

Michael arranges an important meeting and Janet makes a reconnection.

As humans arrive in the new neighborhood, Michael and the group try to understand what makes them tick. Eleanor and Jason both deal with jealousy.

Eleanor and Michael pull out all the stops to try to help Brent become a better person. Tahani and Janet have concerns about Eleanor's leadership.

Chidi's too relaxed, so Eleanor and Michael create tension in his life to force him to become a better person. Tahani invites John to a spa day.

As the group deals with a frustrating lack of progress, a visitor arrives and makes a shocking claim that causes them to question who can be trusted.

E05: Employee of the Bearimy

Michael and Jason sneak into Demon-Con. Left in charge of the neighborhood, Eleanor copes with Derek's ineptitude and Tahani's dissatisfaction.

After Brent writes an offensive book, Eleanor, Michael and the others try to help him evolve. One of the humans discovers Jason's true identity.

E07: Help Is Other People

With one day left in the year, Simone reveals that she's suspicious about the neighborhood -- and her investigation could derail the entire experiment.

E08: The Funeral to End All Funerals

As the Judge hears Michael and Shawn's arguments about the results of the experiment, Janet and the humans give each other the funerals they deserved.

With time running out to find answers, Chidi must sort through his life -- and afterlives -- before he can provide the help everyone needs.

The group scrambles to devise a new afterlife system that the Good and Bad Places can agree on before it's too late. Chidi has a newfound confidence.

While the humans search for test candidates, Michael trains a group of architects. Eleanor doesn't want Chidi to learn too much about her past.

Arriving at a new place, Michael receives an unexpected honor. Meanwhile, the rest of the group explores — and learns a shocking truth.

E13: Whenever You're Ready 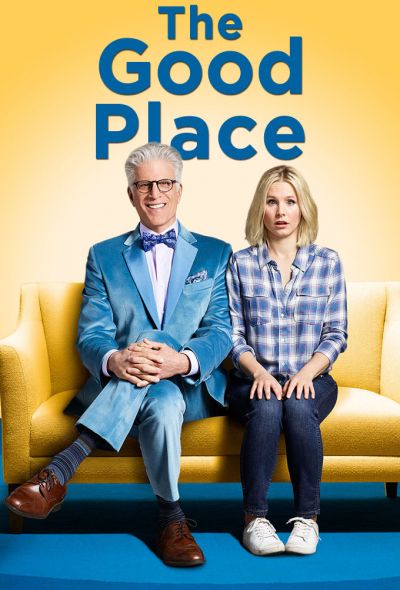