A master stroke devised and perfected for years, planned for months and executed in a few minutes so that the chosen group of thieves who enters the National Mint and Timbre at gunpoint make the police believe that their plan has failed... And that they are besieged inside the building with no other exit than their surrender.

After a failed heist, Tokyo is recruited by The Professor to join his crew in order to steal millions in Euros from the European Union Mint. On the day of the heist, things don't go as planned.

Raquel, the hostage mediator, sets up her first contact with the professor. One of the hostages is crucial to the plans of thieves.

The police catch the image of one of the robbers. Raquel suspects the gentleman she met in the bar.

Raquel is adversely affected by a personal crisis with her ex-husband. The hostages are afraid of the sound of gunshots they heard. Thieves argue among themselves.

A sudden development in the investigation and a mistake made by one of the thieves confronts the Professor with a serious risk that could lead to his identity being revealed.

The problems inside and outside the National Currency and Stamp Factory are growing. The biggest robbery in history does not allow any mistakes and each time, the tension and fear is rising. What opportunities are there for everything to go well?

A new police plan will make Raquel enter the National Factory of Currency and Stamp, right at the core of the biggest heist in history. Berlin, will be responsible for being the most extravagant host that the inspector has ever seen. What is their plan?

Arturo continues to make escape plans for a group of hostages. The professor explains who he got the idea of robbery.

E09: Whoever Keeps Trying It, Gets It

The professor talks with Raquel's mother on stressful conditions. Darphanede wants thieves to choose between money and freedom from the hostages.

The police finds the house where The Professor has planned everything. Tokyo and Berlin are fighting about how to proceed.

Tokyo is questioned by the police. The Professor and Raquel's ex-husband are getting into a fight.

E12: A Matter of Efficiency

The hostages are trying to execute an outbreak, while things are escalating between the robbers. Will The Professor make his call in time?

Raquel is discovering the identity of The Professor. The tension inside the House of national Stamp and Currency is rising.

E14: Against the Clock

The execution of the plan is in its final stages. Inspector Raquel is accused of working together with The Professor.

The police are storming into the National House of Stamp and Currency. Will the hostages be saved and can the robbers escape?

When Río is captured, a distraught Tokyo turns to the Professor for help. Armed with a bold new plan, they reunite the team in order to rescue him.

The Professor recruits Martín to put his brother's plan into action and target the Bank of Spain. First step? Create total chaos.

The Professor shocks officials with his latest stunt, but in response, a new inspector rattles Raquel. Palermo and Nairobi get into a heated argument.

Just as Inspector Sierra orchestrates a plan to sneak a team into the Bank of Spain, the Professor and Raquel lose communication with Palermo.

Tokyo's happiness turns bittersweet. Ángel closes in on a quarreling Raquel and the Professor. Authorities offer a multimillion-dollar reward for tips.

Tokyo attempts to drown her sorrows. Sierra uses personal tactics to target a vulnerable Nairobi, while Suárez continues to hunt down Raquel.

Anger and grief heighten tensions between the group. The Professor, while in mourning, attempts to make a daring and dangerous escape.

Palermo shocks the group with his actions. Sierra pressures her subject to take a deal. The Professor remembers his brother's wedding.

The Professor's mole attempts to pass along his message to the person inside the tent. Denver's jealousy toward Mónica and Rio's friendship heightens.

In the past, Berlin predicts that Gandía will cause problems for the operation. Sierra's interrogation of Lisboa leads to a personal revelation.

Denver turns to an undercover source for help. Nairobi attempts to motivate her team as the danger around them intensifies.

With Nairobi held hostage, Gandía negotiates with the crew. The Professor desperately seeks a new plan to save his team.

The group reels following the attack on one of their own. The Professor puts his adjusted plan in motion with the help of new recruits and Palermo.

The Professor, Benjamin and the others attempt to free Lisboa. Tokyo's anger threatens her faith in the plan. Sierra takes matters into her own hands.

The Professor faces off with Sierra as Tamayo raises the stakes of the negotiations by calling the army. In the past, Berlin meets with a family member.

E02: Do You Believe in Reincarnation?

Arturo seizes an opportunity to fight back while escalating a personal vengeance. Lisbon makes a crucial discovery.

E03: Welcome to the Spectacle of Life

A betrayal and an emergency both catch Sierra by surprise. Palermo rallies the troops as the army closes in on the gang.

E04: Your Place in Heaven

With Helsinki’s life in danger, the thieves mount a covert counter attack. Years earlier, Berlin and his son conduct their first heist together.

While surrounded by gunfire and trapped in the kitchen, Tokyo reminisces about her first love and her initial encounter with the Professor.

Sierra takes advantage of the Professor’s grief and gains the upper hand. Meanwhile, the team deals with the emotional fallout of their dead friend.

Tamayo mounts a manhunt in his neighborhood as his foes hide. In the past, Berlin and Palermo explain how they plan on getting the gold out of the bank.

Tamayo hunts for the gold as the team races against the clock. Mónica worries she’s having a psychotic break. Years earlier, Berlin is deceived.

The Professor is left reeling after his tactics are used against him, and when it seems like all hope is lost, he makes a bold decision.

With multiple lives on the line and Spain’s economy at stake, the Professor and Tamayo engage in one final showdown. 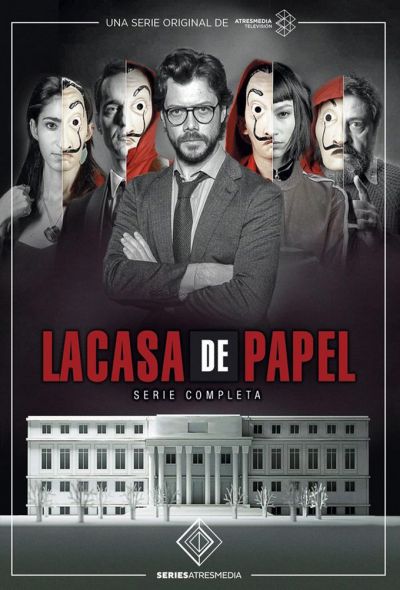